It was an 11 hour train ride to Yellow Mountain. Our host was a young mathematician who became a tanka poet in the small sleeping car we shared on our way. When we arrived we were greeted by lightning and thunder. The cable cars were grounded until the storm diminished. “How could I sleep on the train to yellow mountain? All of China would pass me by.” We stayed two days. Yellow raincoated hikers lined the paths. A fifteen minute break in the cloud cover and storms.

brush with a painting
of yellow mountain
it is real

A bridge built by someone (Photo – Sharon Hawley)

A 50-day drive, hike and cycle to 4 national parks, began September 7, 2019…She says: “Why do my trips begin with careful planning and without careful purpose?…To be honest, I’m not sure, but I have to go.”

Yesterday in the forest of Olympic National Park, I found myself again. Transported to a vast quiet park. A fairytale kingdom where no one else was.

A surprise snowstorm came in the night making Mt. Olympus white and all the peaks around it. Snow fell halfway down to Port Angeles. Roads into the high country remain closed two days later. They will eventually close for the winter, but nobody expected ten inches of snow in late September.

Hiking up from road’s end in the morning—so refreshing, so invigorating. Alone with the snow, the ice and a few trees.

Rainforest is beautiful, and more so when the rain stops. Thick moss covers the ground in a blanket of green. It climbs over boulders, and the rounded shapes of fallen trees. Seedlings sprout from mossy rotted logs, and saplings vie for a place in the scarce sun where a tree fell and took several smaller ones with it. I smell the rich dank luxuriant growth and decay.

Monster trees have ruled here for centuries and I’m the young Alice in this wonderland. Tourists have mostly gone away now at the onset of wet winter. I hike mostly alone. Redwood-sized spruce trees along the river.

On the Climb (Photo – Roy Kindelberger)

I was flipping through one of my journals and discovered this poem. The photo was from over two years ago. After editing and piecing it together. I looked up. I felt like I was there again. The poem feels spiritual. On the up and up.

I decide to stop time. Make time stand still. Not literally of course. Just stop. And walk. I walk some more. I look up at the trees. I listen to the birds. I smell the sea. I sip my coffee. I feel the breeze. And then sit on a piece of driftwood. At some point, I walk again. Time disappears.

Breathing hard. Heart racing like never before. I lean against a pine. The trail continues. But will I?

Until the rocky apex of Sentinal Dome appears. The climax of the ascent before me, I pour out the last of my strength to reach the top.

The whole of Yosemite valley opens before me.

The crunch of snow and the roughness of granite. The spring back of branches as I pull myself up. My head is down and I’m breathing hard as I work my way up the spur. Feel the adrenaline flow up the summit rocks. And then the ecstasy of the mountaintop. Joy surging, the view from the top. I’m the King of the Mountain, that’s all I want be. And then striding, heart leaping, down the hill.

Up There: Quotes and Credits

Sharon Hawley is a poet adventurer who has lived where she started, in Pasadena, California. Her most recent adventure began on Sept 7, 2019, and was planned as a 50 day drive, hike and cycle to 4 national parks.
She says: “Why do my trips begin with careful planning and without careful purpose?…To be honest, I’m not sure, but I have to go.” You can follow her current travels, comment, and see the archives on her blog.

Roy Kindelberger is a teacher and writer. He has two daughters and lives in Edmonds, WA, with his fiance Jaci.

Frank Tassone lives in New York City’s “back yard” with his wife and son. He communes with Mount Mansfield in Vermont’s Green Mountains, and with New York’s Adirondacks, as often as possible. He fell in love with writing after he wrote his first short story at age 12 and his first poem in high school. He began writing haiku and haibun seriously in the 2000s. His free verse and short form poetry has appeared in many international journals and anthologies. He has worked as a special education teacher in New York City High Schools for the past twenty years. He’s a contributing poet for the online literary journal Image Curve, and a performance poet with Rockland Poets. When he’s not working or writing, he enjoys time with his family, SciFi/Fantasy films, meditation, hiking, and practicing tai chi.

Gerry Jacobson is a lifelong mountaineer who lives in Canberra, Australia. With family and professional responsibilities, he scaled down his climbing ambitions. Nowadays he’s not allowed to go above 2000 m, roughly the altitude of Australia’s highest mountain. Gerry gives a weekly tanka prose prompt and is co-administrator of Tanka Poets on Site on Facebook (at the invitation of Kath Abela). It was his Saturday, Oct 5, 2019 prompt “Up There” that inspired the theme of this Salon.

♣ A note from Kath Abela

These themes are now underway, please submit to poetsonsite[at]gmail.com and I will answer you:

Guidelines:
Send no attachments except photos, your poem(s),  and a bio with a reference to the theme. You can also suggest a theme and send some poems to start us off.

Kath Abela Wilson
Colorado Boulevard is your place for enlightening events, informative news and social living for the greater Pasadena area.
We strive to inform, educate, and work together to make a better world for all of us, locally and globally. 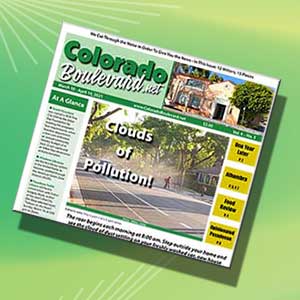