This article first appeared in the ColoradoBoulevard.net December 2020 print edition.

Changes are coming soon to the way yard and food waste are handled here in the San Gabriel Valley and across California.

Each year, says CalRecycle, more than 20 million tons of organic waste goes into landfills in California where it eventually produces methane, a greenhouse gas 84 times more powerful than carbon dioxide.

Composting organic waste does not create methane. That is, why beginning in 2022, 50 percent of the organic waste now going into landfills must be composted under a 2016 state law (SB 1383) aimed at reducing methane. By 2025, a 75 percent reduction in organic waste going to landfills is required.

Here in the San Gabriel Valley, Athens Services, which picks up most household refuse, plans to haul organic waste to a composting facility in the high desert near Victorville. Residents will be required to separate food waste from other trash and yard waste, all in separate containers for pickup. Separate pickup of organic waste is expected to result in modest increases in trash collection bills. So far, so good, you might say.

But here’s the hitch. Athens will haul the organic waste about 80 miles up the Cajon Pass to the compost facility in big-rig trucks, mostly diesel-powered. Even if those trucks eventually run on natural gas, they will continue to pour both smog-forming pollutants and carbon dioxide into the atmosphere. Unfortunately, these truck emissions will diminish the greenhouse gas reduction achieved by composting the organic waste.

In defense of Athens, the company had limited choices of locations for the massive compost facility. In the Los Angeles Basin, both land costs and stringent air pollution control rules make it expensive to locate large-scale composting facilities.

However, all is not lost. Residents can reduce the need for the truck trips by keeping as much of their organic waste as possible at home. Here are some things you can do:

By taking these steps, you’ll save money on fertilizer, commercial mulch, and compost while reducing greenhouse gas emissions and air pollution.

> This article appeared in the ColoradoBoulevard.net December 2020 print edition.

William J. Kelly
William J. Kelly has spent his career in journalism and communications, including as a reporter and editor for what is today known as Bloomberg Industry Group in Washington, D.C., and as a writer for numerous publications. He also managed communications for the South Coast Air Quality Management District and has authored several books.

Colorado Boulevard is your place for informative news and social living for the greater Pasadena area.
We strive to inform, educate, and work together to make a better world for all of us, locally and globally. 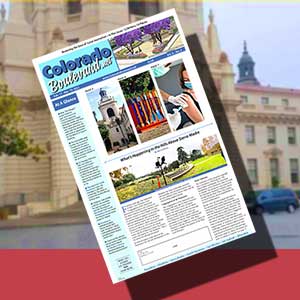